Summer is upon us with vengeance. The heat (and the humidity) is almost intolerable. That soft drink in the fridge by the checkout counter of any store is just the right thing to quench that miserable feeling. But do you choose the regular or diet soda? What’s the difference?

The following article by www.fooducate.com compares the contents of the Pepsi Next diet drink against its regular soda cousins. Warning – the truth may sting a little! 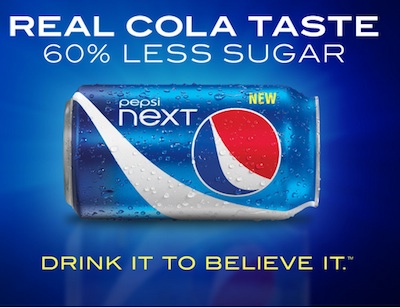 When we joked about the big cola companies removing 30% of the sugar from their soft drinks as an April Fool’s prank, some people responded in all seriousness, having spotted such a cola from Pepsi out in the wild. And indeed, Pepsi Next boasts a 60% reduction in sugar!

Could it be that we are on the cusp of a soft drink revolution?

What you need to know:

Note that while sugar content has been reduced, it is still the second ingredient after water (in the form of high fructose corn syrup). There are still 4 teaspoons of sugar in a 12 ounce can!

True, about 6 teaspoons worth were removed. But unfortunately, Pepsi Next has simply replaced the missing sugar with artificial sweeteners, same as those used in its diet drink. And not just one or two, but a thoroughly sickening triumvirate including aspartame, acesulfame potassium, and sucralose.

Each of the three has its related health concerns, and artificial sweeteners in general mess with the body’s capability to deal with sweet. The dissociation between sweet taste and calorie intake may put the regulatory system that controls hunger and body weight out of sync, thus sabotaging weight loss plans. A study on rodents showed that those fed artificial sweeteners actually gained weight compared to rodents fed sucrose. For more, read Three Reasons to Rethink that Diet Coke You’re About to Drink. 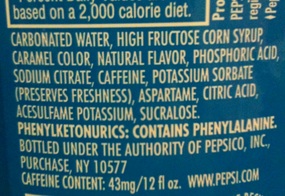 Here’s what the Fooducate grading and analysis for Pepsi Next looks like (web version): 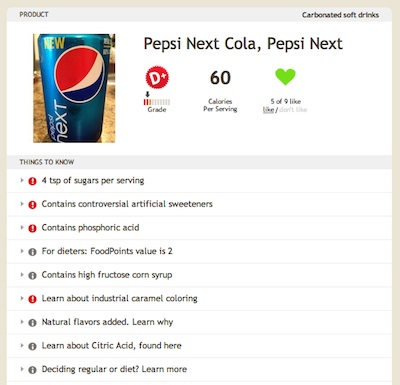 What to do at the supermarket:

Don’t look for health when it comes to soft drinks, whether fully loaded with sugar, artificially sweetened, or this hybrid Next product. Switch to soda water infused with some fruit juice, then work your way to regular water. If you can make it, you’ll save your family $500 a year by switching to tap water…

Pepsi Next claims to have 60 percent less sugar without sacrificing taste. The secret to keeping its sweet taste comes from the use of THREE artificial sweeteners: aspartame, acesulfame potassium, and sucralose.
Aspartame (Nutrasweet and Equal) is believed to be carcinogenic and accounts for more reports of adverse reactions than all other foods and food additives combined.
Acesulfame potassium (Acesulfame-K) has been linked to kidney problems, and sucralose (Splenda) has been found to reduce the amount of beneficial microflora in your gut by 50 percent—in addition to being associated with many of the same adverse reactions as aspartame.
Contrary to popular belief, research has shown that artificial sweeteners can stimulate your appetite; increase carbohydrate cravings; stimulate fat storage and weight gain.

Previous
Bone Broth For Joint Inflammations
Next
Amazon Plans to Buy Whole Foods: What Does This Mean for the Future of Food?

The information contained in this website is based on research done by Healthy Indeed Wellness unless otherwise stated. The information presented is to be solely used for educational purposes only and it has not been evaluated by the Food and Drug Administration. Products, services and education material provided herein are not intended to diagnose, treat, cure, or prevent any disease. None of the information given herein are to be regarded a substitute for professional medical advice.